Future of Film and Television is Not on the Web? 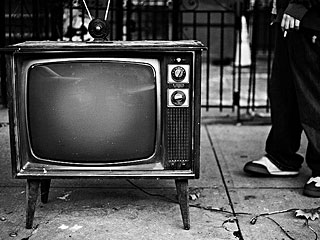 Keep it for now. Photo by Brandon King (Creative Commons).

“So many of the major media companies thought they could just make a good show, put it online and sell advertising,” said Jim Moloshok, a former Warner Bros. and Yahoo executive who is now chairman of online advertising company Betawave. “That’s like taking a radio show and running it on television.”

Business models for content on the Internet are still evolving. But it’s already becoming clear that $100-million movies like “Land of the Lost,” or even $10-million independent films, may not represent the future of the industry. And new technologies like YouTube, the iPhone and next-generation gaming consoles are opening up all sorts of new, creative possibilities. The artists and business people who will succeed in this new environment are those who are paying attention to the changing behaviors and tastes of this new digital audience — rather than trying to ignore them or, worse, explaining why they are wrong.

I’ve been saying it for over a year. If anything the web is a great tool for distribution of already “known” material, i.e. hulu, netflix.

The internet is a great distribution tool. It can also be a great marketing tool, but it doesn’t market for you.

Supposedly, the average advertising cost for a movie is $30 million. (Of that 5.3% is currently spent on Internet advertising.)

If media companies want content to be successful online they need to learn how to successfully market their content there.

Also in my opinion they need to learn to look at the entire market when considering whether something is a success not just “sales”. “In film, for instance, the International Licensing Industry Merchandisers’ Association (LIMA) estimates that Hollywood derives $16 billion annually from sales of entertainment merchandise, a figure that exceeds the value of ticket sales (Film Encyclopedia, 2008).”
See the Harvard Business School working paper on file-sharing and copyright for more info: http://www.hbs.edu/research/pdf/09-132.pdf