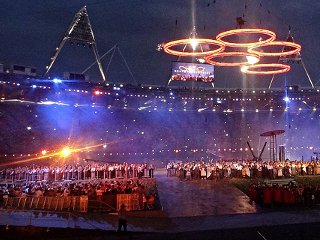 On one hand, a lot of people want to watch the Olympics, making it a dream for cable networks selling ad space and trying to increase cable subscriptions — the opening ceremony this year by director Danny Boyle on July 27th, for example, had record setting viewership records for telecast. But on the other hand, a strategy of live streaming that skips over, cuts short, and provides no alternative to a set-top television fails to embody the age-old tradition of bringing people together for the Games.

People gather together around all sorts of media nowadays, not just TV. Yet the Los Angeles Times quotes an NBC spokesman on the backlash, who says arrogantly, “It was never our intent to live stream the Opening Ceremony or Closing Ceremony. They are complex entertainment spectacles that do not translate well online because they require context, which our award-winning production team will provide for the large prime-time audiences that gather together to watch them.” 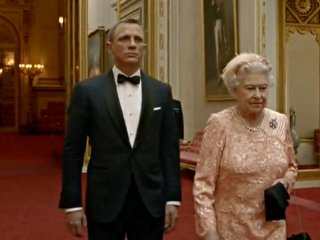 The opening telecast — on the BBC — included a six-minute short film, “Happy and Glorious,” which featured Queen Elizabeth and Daniel “James Bond” Craig. (See BBC’s article on the making-of.) NBC’s website uploaded a much shorter cut.

It’s a major strategic disconnect for NBC to ignore and skirmish such an audience. Uploading a few minute-long re-edits of a three-plus hour event isn’t a strategy. Pulling files from YouTube of the full-length opening short film with Queen Elizabeth and “James Bond” — now flooded with spam videos, the hit counts an indicator of the mass interest — isn’t a strategy. Citing complex content and a hook for context when on-air commentators are criticized for their ill-preparedness isn’t a strategy. It’s a negative, unfulfilled user experience that might have worked in 2002, but doesn’t fly in 2012.

This isn’t the only complaint. In an article entitled “every single person in America is pissed at NBC’s Olympic Games,” Gawker rounds up all of the criticism, with the most prevalent complaints surrounding telecast delays for west coast primetime. TIME ran an article about the dedication to “loved ones who couldnâ€™t be with us,” cut out for the entire U.S. audience.

What’s going for the Olympic telecast this year, however, is a reduction of cut-away back-stories, long commercial breaks, and a limited quantity of sports. It’s a noticeable and welcomed improvement, but none of which impact online.

Before they prep the next ones, the Sochi 2014 Winter Olympics, NBC should consider the material they’re dealing with here. This isn’t the Oscars. This isn’t a boxing match. This ought to be a public service, a point of national pride. Monitize away, but please democratize and share — especially if your marketing hypes that they’re live-streaming the Olympics for free.