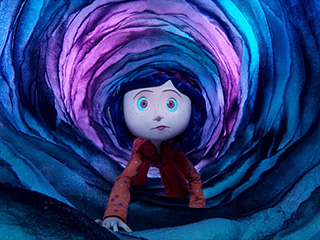 This Valentine’s Day weekend especially, hundreds of tweets were posted about “Coraline.” These text messages via Twitter say a lot with a little about the biggest little film in theaters.

Neil Gaiman, author of Coraline, is on there:

Jon Hodgman, actor, also uses Twitter. One of the tweets at Hodgman:

Coraline opened on the 6th: 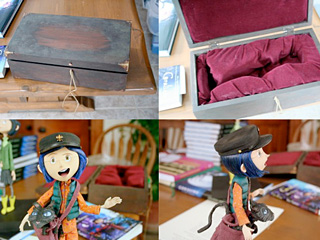 See NotCot and Super Punch for pictures of most of the boxes.

Originally, part of the marketing of the film was to send 50 hand-crafted boxes to 50 craft-savvy and film-friendly bloggers. Each mystery box also had a clue to access Coraline.com, which at the time needed a password to access. (They ended up being stopmotion, buttoneyes, puppetlove, armpithair, moustachio, and sweaterxxs.)

And today marked the last day of the 3-week exhibit at San Francisco’s Cartoon Art Museum, which featured nearly 80 props created by over 300 artists:

The film’s official YouTube channel has all of the making-of videos including “Meet the Cast,” “Biggest Smallest Movie” and “Miniature Knitter.” You can watch “Koumpounophobia,” below:

Those celebs should sell their tweets, no free ads!