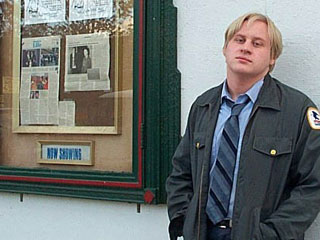 As a headstrong cinema studies grad of Suny Purchase, Eric Szyszka calls it like he sees it and knows what he wants; but for some collaborations, when he believes in his work and the people around him, means he’s the type to pulling the extra shifts to save up to help fund and fly out to Los Angeles, just to get his next short film made with the right players.

Eric started with do-it-yourself — when miniDV surfaced in the late 90’s as a low-cost medium — and have since trimmed the fat of glam expectations, ending up with a realistic and confident picture of the kind of cinema we want to pursue.

I have yet to actually meet Eric, but he and I have known each other for years. We share a unique interest online, beginning with a collaboration via the Star Wars character Boba Fett before discovering a shared passion for filmmaking.

1. What are you most proud of and what do you want to do next?

I’m most proud of my feature length script Bad Reception: “On the trail of a lost television set, an aging private investigator finds himself embroiled in the seedy world of snuff film and realizes that without any help, he might become the star of the next production.”

The script has become an obsessive passion project of mine as it started with a short 19-page script. In 2005, I expanded it into a 105-page feature that was very low-key, like if About Schimdt had been about a detective. In 2006, I decided to rework the entire script, throwing out nearly 80 pages. Now, it’s a lean 90-page noir/thriller. I really amped the drama and raised the stakes. While the script previously went down slice of life roads, it now just hits you one page after another until the end.

I’m currently working on a first draft of a war film which is coming along surprisingly well. It’s along the lines of all those classic ’60’s and ’70’s war films: Kelly’s Heroes, The Dirty Dozen and Where Eagles Dare. But the hook is, it doesn’t take place anywhere you might imagine.

2. What working a regular job taught me about art.

Day in and day out, it has shown me that art is the most precious outlet for my emotions. The major problem is that there never seems to be enough time for art during the daily grind and routine. I struggle each night to create something. In a way, while having such a structured life limits the freedom to create, it also gives you a constraint, giving myself a routine to say, this block of time is the time to write. Seize the day, everyday.

3. What real or imaginary technology in emerging media would you want to explore and why?

I think the biggest new force in filmmaking and television is definitely the internet as even the major networks are going the way of the web, i.e. displaying entire shows online. I would love to try and get in on this. I’m positive some show will hit it big on a network originating from viral video popularity. I have some of my short films on YouTube which have gotten some good attention there.

A short comedy TV show — YouTube series, excuse me — would be really fun to create and explore, say on a monthly basis. One season would be a year long — a 12 episode run, like some of the smaller TV orders that exist. (Shows like It’s Always Sunny In Philadelphia average about 10 episodes/season.)

4. With whom and how do you collaborate with best?

Unfortunately, I haven’t collaborated with enough people. I was the director, writer, DP, and editor on most of my short films. I really want to collaborate more and I think starting to focus more on writing will help me do that more in the future. It would be especially interesting to see how someone else would direct my words.

My first feature script, “Skits-A-Lot Bandingo,” was written with a co-writer, Chris Mead, which was so much fun because it was a comedy. We talked and scribbled on notepads. The piece became a really unique surrealist comedy. I think that was the best collaboration I’ve ever had because we kept it fun.

In general, collaboration is so essential to make something work. In 2004 I was an intern for Late Night with Conan O’Brien and I remember Conan pitching an idea to head writer Mike Sweeney. I actually thought it was a bad idea, which surprised me, “how can Conan come up with an idea like this?” But it turned out through collaborating with Mike, the director Alan, and everyone on the show it turned out to be pretty amazing and most importantly: funny.

It really taught me that every idea starts small and gets built up. This happens in the production of anything. During the creation of my short film Unsent, my lead actor Robert Lincourt pitched me an idea for a shot of him walking across a baseball field smoking and drinking. This was after we wrapped, but I thought he had a great concept, so we hit the road and shot it. Just the two of us. It turned out to be my favorite shot in the film. It really summed up the film and what I wanted to do by really presenting us with this pulpy tragic figure in the center of picturesque wholesome America.