Double Message of “The Girl Effect” 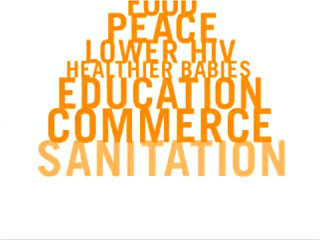 Matt Smithson is the director behind the new viral video calling for social change, “The Girl Effect.” The spot was created for Wieden+Kennedy and is part of the $100 million-backed effort from Nike Foundation and NoVo Foundation to the cause, which is about being “the powerful social and economic change brought about when girls have the opportunity to participate in their society.”

The high contrast, upper-case and sans-serif type, along with the quick tempo and elegant strings, serve to communicate the issue clearly and quickly in the 2:23 video. It works as an introduction to the web site, but also stands alone:

By using two elements — such as typography and music — the message resonates. Simon Robson’s 2003 video, What Barry Says, combined the voiceover by Barry McNamara with computer-generated visual metaphors to make its point on social change. Pangea Day’s trailer, What If, which was posted here earlier, elaborated upon iconic video and realistic voice-over as focal points. Even Nike is known for this style, merging jump-cut edits and playful piano for their anthem spot during the 2002 Olympics.

But what message is this type treatment saying? Nike has been criticized in the past for associations with third-world sweatshops. This efforts with this campaign positions Nike as supporter, not exploiter, which helps appeal their image.

And why the girl effect — wouldn’t this theory work with anyone? The fact sheet for the effort notes that women reinvest 90% of their income into her family but a man will reinvest 30 to 40%.

Related, Matt and Sean Pecknold started “a small art and film collective called Pickles to showcase the work of [their] friends.” From one collective to another, hello!

If there’s ever a sub-group of humans that needs help it is boys. Girls make up nearly 60% of those graduating from college. Males are 4 times as likely to commit suicide. They are 9 times as likely to end up in prison.
It takes no courage to support “girl causes”, that’s very PC. It takes courage to tell the truth, boys are the ones who are society is failing. Men are far more likely to die of AIDS. As far as giving/re-investing into the family, I don’t know where the statistics mentioned come from, and I question their factualness, but the strength and size of most males, especially in third world countries make them of greater economic importance to a family. If you are going to help women, then pour your resources into making their husbands/fathers/sons successful. You’ll get more for your money. You’ll keep the crime rate down. You will have happier women.

Patrick, thanks for your comments. Those are some good points, too. Regarding the source of statistics, I see the GirlEffect.org cites them in this PDF:

[…] and wellbeing of adolescent girls in developing country.Ã‚Â  Perhaps doing their best to lose the exploiting sweat shop image. The message delivery is really something […]

Patrick, society is failing humans, not just boys and not just girls. Size and strength doesn’t matter if it doesn’t get used. A majority of hard labor is done by women in developing countries precisely because they are under the control of bigger stronger men. Your approach is the same patriarchal approach that hasn’t worked so far. Its time for something new. It works the other way too: if you help the women, you also help the men. Having said that, if you feel so strongly, go out and help the boys – they need it too. All help is good.
The Girl Effect video is highly effective promotion with a profound possibility to make a difference – a synergistic partnership.