Don’t Make Your Passion a Secret 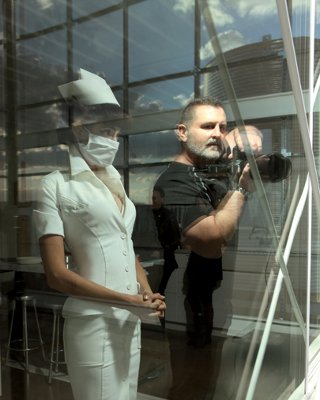 Hollywood exec Tim Palen recently made Fast Company’s Top 100 Most Creative People in Business. In addition to being the head of Theatrical Marketing at Lionsgate, which had a record year of success in 2010, he also photographs the posters for his films, including Saw, Precious, and Hostel among others. He offered some inspiration in the profile:

“The best advice I got was from a mentor who told me to ‘not make my passion a secret.’ He encouraged me to give my work away, paste it on the walls, and share it with as many people as I could.”

In a 2007 review of Hostel II marketing in the Los Angeles Times, columnist Patrick Goldstein explains the reaction to Palen’s authentic but controversial work:

The photo, which appeared in an ad in our paper on Sunday, stops you in your tracks, which, of course, is what great advertising is meant to do. If you want truth in advertising, this is it — you couldn’t possibly walk in to see “Hostel: Part II” thinking it is a harmless teen comedy. But while I admire the art of these posters, there’s a fine line between an image that deftly captures the spirit of a gory film and an image that glamorizes the degradation of women.

While Palen’s work is often over the top, it’s demographic appropriate. And it sure beats floating heads.

Wow, so all I have to do is become the boss of everything, then people will let me do whatever I want? Truly inspiring.