Do actors need to succeed sooner than directors? 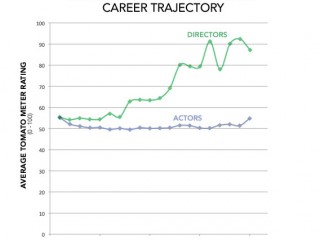 According to Slate.com’s “Hollywood Career-O-Matic,” a mash-up of select RottenTomatoes.com statistics from 1985 *, their data visualization suggests actors have to make it great first, whereas directors have to keep getting better.

The average actor’s critical reception gets slightly worse over the course of his first few movies, then plateaus. The average score for an actor’s first film is about 55 percent. By his fourth movie, that score slides to about 50 percent, where it hovers for the rest of his career.

Directors’ careers follow a different trajectory. Like actors, a director’s first movie averages a Tomatometer rating around 55 percent. But the average ratings for the next few movies don’t drop much at all, never falling below 54 percent. Then, between the average director’s seventh and eighth movie, the Tomatometer ratings jump dramatically, from 55 percent to nearly 63 percent. That score stays steady for the average director’s ninth through 11th films and then jumps again to the 80s and 90s for the rest of his career.

Most actors have to appear in good movies early in their career. Those who don’t risk being flushed out of the business. Once they’ve established themselves with a good film or two, they can safely make some bad ones. But all in all, they don’t have nearly as much control over film quality as directors do. Directors’ scores spike over time, presumably because only the best ones stick around long enough to make so many films.

Is this still accurate in today’s film industry? Or are there exceptions now more than ever? Does this pressure for acclaim exist for actors or is there merit to quantity over quality?

* RottenTomatoes.com has been online since at least 1999 and some critique of this data is its accuracy back into the 1985 cutoff of their mash-up.