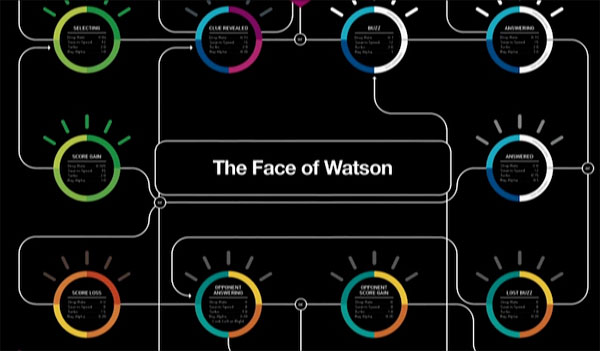 The final work has been on the air for the last two nights and concludes tonight, February 16. The technology behind Watson is Adobe Flash technology and the HYPE Framework.

In an interview with Fast Company:

Watson uses a slew of complicated algorithms to parse every “Jeopardy!” clue, gather possible answers, and weight each guess according to how “confident” it is that the guess is correct. Davis visually represents these patterns in 27 possible states that the avatar can be in. Generally, when Watson is confident in its guess, the particles swarm to the top of the globe and glow green; when Watson is not confident, they flow to the bottom and glow orange. And while Alex Trebek is making chitchat at the podium or reading off clues, the avatar pulses a cool IBM blue.

For more about IBM’s Watson, visit the official site.