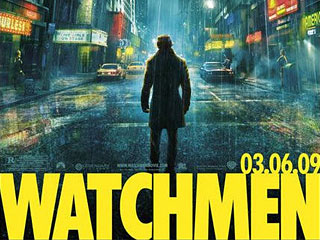 Q&A with the Oscar-winning screenwriter of “Valkyrie”

Creative Screenwriting senior editor Jeff Goldsmith interviews Christopher McQuarrie, who goes into some great stories, such as “The Usual Suspects” and how he started out in the industry. (It was a huge help that, as a kid, he knew Bryan Singer.) The podcast is over two hours, which is longer than the feature film. Also check out the audio interview with screenwriters Andrew Stanton (“Wall-e”), Alan Ball (“Towelhead”), and Jonathan Nolan (“The Dark Knight”).

This import has an added emphasis on the global political climate. But it also includes the things they leave out of American trailers: JFK, Castro, and Nixon’s third term. “Watchmen” is an alternate 1985 in which we won Vietnam and Nixon is still president.

Great trailer for ‘Watchmen’. Sometimes I get worried that a film like this will have a extended running time simply due to slow-motion (see Mission:Impossible 2), but I have a feeling that it’ll be incorporated into the atmosphere of the film and not just to “look cool”. I once read an interview with Michael Stipe in which he said, “I don’t like slow motion. It’s just not real.”

Slow motion can work well when you’re dying, consider when something major happens, a car crash for instance. It feels like its an hour but its just a second. Watch Sam Peckinpah for some amazing use of violence slow-mo that works, and works well.

Also the graphic novel is so huge, it can’t NOT have a long running time. Great book, by the way. A must read.