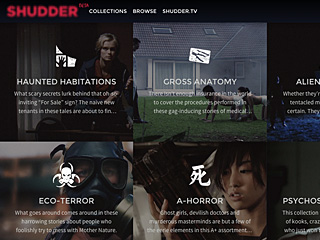 Always a fan of film websites that rock the boat. Shudder is one: a paid, online video platform that focuses collections of films into horror-specific genres, like “alien intruders,” “romantic bloodsuckers,” and “zombie jamboree.”

The site itself is actually a spin-off of Dramafever, a Korean-based site that focuses on Korean dramas and Latin American telenovelas — just with a little less creative copywriting involved.

Careful when you claim “first.” Jameson’s ad agency, 360i, got some press for a Facebook and Instagram “first” video ad that gives off a 3D look. But, as one astute commenter noted, they weren’t “first.” There’s already a whole Reddit for these things, which are coined split-depth GIFs. Here’s one that’s more well crafted for example made by a fan, ScottInLNK: