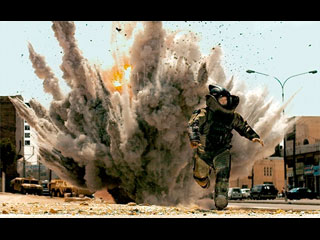 In its run-up to this year’s Oscar for Best Picture, “The Hurt Locker” is getting quite the push-around from both sides. Pundits either applaud its authenticity or frown its fictionalization. The New York Times published an essay, “How Not to Depict a War,” written by the photographer of a video following an explosive ordnance disposal team:

I understand the argument that Ms. Bigelow and her team should be applauded for tackling certain issues and bringing the war home to Americans. Yet with so many scenes and details untrue, the actual war in Iraq becomes merely a dramatic jumping off point for the filmmakers.

When a filmmaker gets that many details wrong, itâ€™s hard to believe she got the war right. â€œThe Hurt Lockerâ€ is not a drama about a make-believe event. This is a movie about an ongoing war that has affected millions, in which 100,000 Americans are still serving. It deserves a minimal degree of historical accuracy and attention to detail.

But also check out the opinion on the other side from regular columnist Meghan Daum in the Los Angeles Times:

Hollywood always plays fast and loose with reality. That’s why it usually makes dramas and not documentaries — and, let’s be honest, it’s also why Americans buy its products in such bulk. We’re not looking for facts; we’re looking for entertainment and (even at the movies) some deeper truth that art reveals.

In the end, the controversy over “The Hurt Locker’s” authenticity and its worth as an Oscar contender perhaps speaks less to the relationship between truth and fiction than to the relationship contemporary humans have to some mythical notion of “reality.” 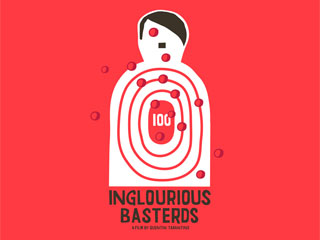 David Choe, Sam Flores, Estevan Oriol, Grotesk, Jeremy Fish, Patrick Martinez, Alex Pardee, Dora Drimalas, Munk One, N8 Van Dyke, Rene Alamanza, Morning Breath and Skinner Davis … create[d] their own poster art based off their interpretation of the film, â€œInglourious Basterdsâ€ artwork. … Each print will be numbered and signed by Quentin Tarantino. Only six (6) of each amount will be made. 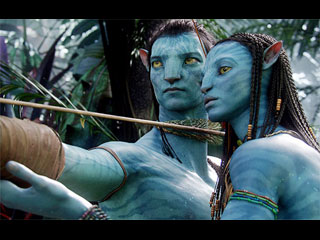 “Avatar” is up for nine Oscars and the James Cameron film is expected to pick up many. Harvard Business Review just published “Firing Is Too Merciful: How James Cameron Leads,” an insightful article by Rebecca Keegan, author of “The Futurist: The Life and Films of James Cameron.” Mantras like “good isn’t enough,” “break new ground,” and “lead from the front” work whether you’re rich and famous or not quite yet:

Cameron is almost comically hands-on. He does things elite directors don’t do — hold the camera, man the editing console, sketch the creatures, apply the makeup. The truth is, he would do nearly every job on a movie himself if he could. But any film, much less one as ambitious as Avatar, relies on collaboration. Forced to lean on others, Cameron sets the pace. Among his 3000-strong stable of artists and engineers, he’s the first to try a new challenge, the last to quit at the end of the day, and the hardest to please.

(Thanks to @GuyKawasaki for the Cameron link.)