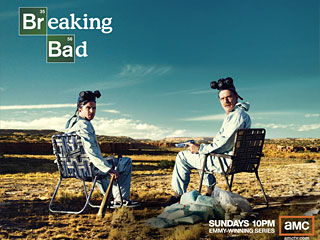 What makes “Breaking Bad” a success? According to one tweet, series creator Vince Gilligan notes, “It’s a lot blood, sweat and tears. And six great writers.”

Being open to change and constant discovery has yielded strong results for Gilligan. In fact, so much so Gilligan has been able to create twice as many hours of Breaking Bad than what he originally planned. â€œHaving a rock solid idea of how it all should end is counterproductive,â€ Gilligan says, â€œIf youâ€™re too rigid in your thinking you may miss some wonderful opportunities for storytelling.â€ (via Fast Company)

Almost never off the ground with studios taking a pass, plus “Weeds” already greenlit around the same time, the initial season also had the strike:

The streak of bad luck continued with the writers strike, which cut Breaking Bad’s original 13-episode first season to seven. But in hindsight, many involved call the forced pause a blessing because it allowed Gilligan and his writers time to gather their thoughts. (Early plans for the series included killing off Paul’s character.) Nonetheless, it was enough time for the TV Academy to recognize that here was something special. (via The Hollywood Reporter)

Despite all the hurdles, and inclusive of numerous accolades and critical acclaim, Gilligan sees a charming value in coming to the end:

I’m going to tell every goddamn last bit of story I can possibly get in there with these next 16 episodes. I want it to end with the last 10 seconds of picture on the very last episode and I wantâ€“ My fervent dream is for this show to end and for people to say, ‘Oh my God, that was what I hoped for and I’m going to miss it â€“ now, what’s on next?’ (via Rolling Stone)