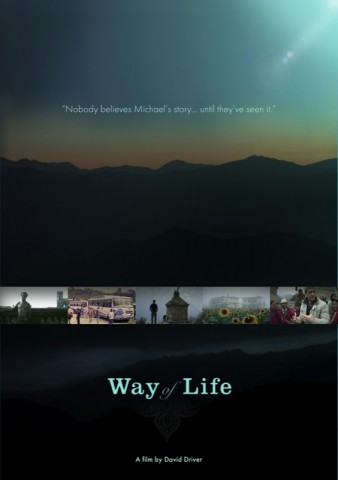 5/12/2012 Update: David Driver reached and exceeded the goal one day before the deadline!

There’s less than a week left in David Driver’s Indiegogo drive to raise $20,000 for his feature, “Way of Life.” It’s close — really close. I asked the filmmaker, and personal long-time mentor, what it take to get this far, how does it compare with other fundraising choices, and what’s involved in wrapping it up to ensure a strong finish.

Describe your overall experience of continuing to complete this long-standing project over 8 years. Any key moments, highlights, or turning points?

David Driver There are a lot of turning points. Nothing terribly dramatic, but you are always pursuing elements of a story hoping they will pay off. This particular film took a long time to materialize. There were a lot of false roads to go down before I came to a final idea about how the film would work.

One key moment I had was working with a legendary film artist/doc fixer on another unrelated project. I was working with Nathaniel Dorsky cutting a completely different film. Nick is totally old school. Now in his late 60s, he grew up using flatbeds and rewinds. His films are all shot on 16mm and all silent. So when he is called in to do some fixing he has to work with another editor to run the software. He sits back and dictates how things will be. And dictates is the keyword here; he is incredibly insistent on how things will be. At the time I was working with him, there were a lot of discussions as to why material was cut and what was changing in that particular film, but Nick always won out in the end — for a good reason. There was a clarity of style and keen idea as to identify story elements that he applied to the process.

Iâ€™ve cut hundreds and hundreds of pieces but the experience totally affected me. It is like one of those situations where you are learning something simply by engaging in this process with someone who is really good at what they do. Itâ€™s like it rubs off on you. I gained another layer of editorial perception during that process.

After that, it started to become clear to me how my film would look and feel. “Way of Life” is a slow moving meditative piece that works on a deeply inspirational level. It is one of the most difficult types of film to construct because it is easy to go off the deep end in any direction.

I’m thankful for my time working with a genius like Dorsky and for gaining so much knowledge from that experience. After that, I started to construct the final version of “Way of Life” and present it to peers, audiences and of course my long-time mentor, Ronald Chase. I finally had a clear inspiration for what I wanted the film to be after working with Dorsky but it would still take many months to fashion it into the film it is now. If it were an issue driven piece or a journalistic piece it would have been simpler and faster.

How is this experience with Indiegogo different than other fundraising efforts — online or offline — whether it’s the San Francisco Film Council or people just writing checks?

DD Fundraising is always tons of work. It is never easy. (Grant writing and wooing donors are both a different story.) For â€œfundraising,â€ I am saying something that will definitely bring in money; the question is â€œhow much.â€ Normal fundraising tends to revolve around an event — say a screening or a party or something like that. You go through a lot of effort to get people to a venue, set it up, serve food and drinks, you show your piece and you make a pitch. Sounds simple enough. Then you factor in the idea that 40% of the people you send invites to will answer, and maybe another 40-50% of those who answer will actually show up. There are probably real statistics for this stuff. I’m just talking anecdotally now. At any rate, your event happens and letâ€™s say your event is even â€œa success.â€ You get some money and then you start to measure that against the work it took to do the screening and process the checks. You start thinking, â€œis there an easier way?â€

With a crowd-sourcing platform like Indiegogo, you have clear format set up so you can show people what your are doing on an ongoing basis. I canâ€™t say that it is any easier. There is a lot of work to do to set up the campaign and a lot of strategizing. I did a spreadsheet that factored in all the fees and the cost of all the perks for each level of participation. Then I started plugging in numbers for each contribution level and seeing what it would take to reach our goal.

I had the basic idea that 400 people contributing $50 bucks for a limited edition DVD would equal $20,000. I thought I probably had to get the campaign in front of 10 times that many people. Then we really tried to set up a incentive structure that would encourage people to reach beyond the DVD level without burdening people with too many choices. To a certain extent, we got it right.

Once the campaign starts, it is a long grueling process. Your job is to try to keep people talking about the campaign for its entire lifespan. You track the data and the views on Indiegogo/Kickstarter and on Facebook, Twitter and your video platform. Then you keep trying to post things that people will respond positively towards. You want to keep people talking about things without turning people off. It is not an easy task and it takes a lot of work to maintain.

I was very encouraged from the beginning with the level of support we were getting. I have always tried to help people out — in the business wherever I could — and it seemed like that attitude was being reflected in the generosity I was seeing. Plus, the main character, Michael Daube, is a great guy who does a lot of good for people so there are folks who really wanted to see his story get out to more people. I also think that the overall incentive structure seemed to allow people to jump in at a higher level.

What’s the biggest surprise you’ve come across in the final leg of this film?

DD It was really heartwarming to see the generosity of so many people. In the end, if we reach our goal, we will probably do it with half the number of people we originally thought.

What’s your next step with this film, and your career?

DD We are looking forward to playing at a few festivals and then getting it out to people to see, probably through a mix of DIY distribution platforms.

How can people help right now — and after this pledge drive ends?

DD The deadline for this drive is this week, May 12th. So take a minute and check out the campaign. If you like what you see, join us, make a contribution, itâ€™s a great story to be part of.

When we wrap the Indiegogo campaign, you will no longer be able to get your name in the credits. You will still be able to make a charitable contribution to our fiscal sponsor, The San Francisco Film Society, and we will give you a DVD or a T-Shirt or USB jump drive.

As for me, Iâ€™ll start looking for a new project. There are opportunities I have been looking at. But itâ€™s really all to be determined. For the most part, Iâ€™ll just keep at my day job which is, for the most part, shooting and editing.