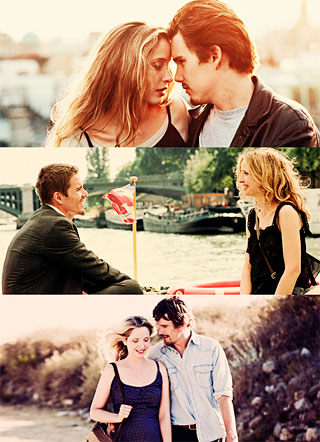 Salon.com has a heartfelt story of Richard Linklater’s actual life before the 1995 film production of “Before Sunrise,” which now has a third film, “Before Midnight,” currently in theaters.

Even in the midst of that romantic night, the filmmaker in Linklater couldnâ€™t help but consider its cinematic possibilities. In a 2004 interview with the New York Times, he remembered â€œwalking around [thinking], â€˜If I could just capture this feeling Iâ€™m having right now,â€™ instead of actually having that feeling.â€ On a recent episode of the podcast The Q&A with Jeff Goldsmith, he recalled mentioning the movie idea to Lehrhaupt that night:

Even as that experience was going on â€¦ I was like, â€œIâ€™m gonna make a film about this.â€ And she was like, â€œWhat â€˜thisâ€™? Whatâ€™re you talking about?â€ And I was like, â€œJust this. This feeling. This thing thatâ€™s going on between us.â€

Linklater, famous for avant-garde and realistic films that are often set within a single day, was lucky enough to capture that feeling and making a trilogy from a single night’s adventure.