Participating after the credits roll 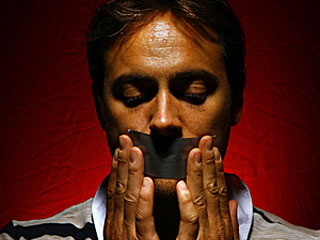 Stuart Townsend, actor-turned-writer/director, took his disenchantment with uninspiring projects and did something about it.

“Battle in Seattle,” which opened in limited release September 19, is a fictional take on the 1999 protests of the World Trade Organization, which mixes real footage of the peaceful scene that eventually turned into a violent riot.

View the official trailer for the docu-drama:

At a screening Sunday night which included an opening remark by Townsend himself, he noted it took six years “within the insane Hollywood thing” to get the film from idea to screen. He asked the audience to tell their friends about the film, but in Sunday’s Los Angeles Times, he also noted the options online to engage with his audience for the greater cause. Offering ways to become active participants works especially well with this film since the WTO Protests in Seattle, 1999 were “the first Internet protest in history.”

Townsend hopes that the film will serve as a jumping-off point for a new generation of protesters and citizen activists. Townsend has created … websites — including whocontrolstheworld.com and 5actions.org — where people can network, sign petitions, organize protests or simply become informed about issues related to the film.

“Ultimately, I’m trying to make this film for all those young Barack Obama supporters who are energized, who realize the stakes are high, who are becoming political, becoming aware and educating themselves,” says Townsend. “It’s those younger, more idealistic people who see this movie as a clear example of how change really happens. It’s actually putting your boots on the street and using your voice. That’s how change happens.”

For comparison, view one of the many actual accounts of the protest:

A regular theme of socially conscious films, change works when the audience can make a difference in evangelizing the film beyond downloadable ringtones and wallpapers. Participant Media is one “provider,” as they call themselves, that for every narrative and documentary it distributes, they emphasize the social follow-through actions. They even created a social network to wrangle action for all of their projects, TakePart.com, such as Brett Morgen’s “Chicago 10”. Another Participant film, Davis Guggenheim’s “The Inconvenient Truth,” made use of ClimateCrisis.net and WeCanSolveIt.org. The ending credits, embedded below, help to transfer the end effect of the movie to next steps.

See previous posts about the passion-centric efforts of the environment documentary “11th Hour” as well as the social advocacy angles of EyesOnDarur.org, Ironweed Film Club, Good Magazine and Current TV.

If only more people were willing to stand up for injustice, it wouldn’t happen nearly as much.