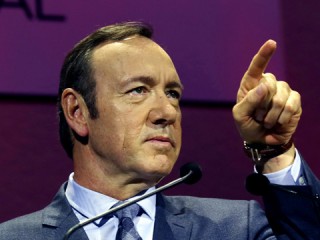 Kevin Spacey on the future of television – video. Photo via The Guardian.

Kevin Spacey recently delivered the James MacTaggart Memorial Lecture, a main event of the Edinburgh International Television Festival dedicated to the writer/director namesake as well as polemic issues in the industry. In addition to curbing piracy, Spacey believes releasing content online will be a win-win for both networks and audiences.

And the audience has spoken: they want stories. They’re dying for them. They are rooting for us to give them the right thing. And they will talk about it, binge on it, carry it with them on the bus and to the hairdresser, force it on their friends, tweet, blog, Facebook, make fan pages, silly GIFs and god knows what else about it, engage with it with a passion and an intimacy that a blockbuster movie could only dream of. All we have to do is give it to them. The prize fruit is right there. Shinier and juicier than it has ever been before. So it will be all the more shame on each and every one of us if we donâ€™t reach out and seize it.

Check out the entire transcript by Telegraph.co.uk.

Obvious, but how many #film #productions are doing this now? http://t.co/kbc7uLy6U0