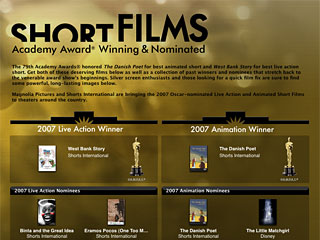 To coincide with the Academy Awards, a new set of short films became available on iTunes. For $1.99, OscarÂ®-nominated and â€œwinning shorts of this and year’s past are now “download-to-own,” part of a three year agreement.

In general, short films are limited to friend-of-friend networks, film-aficionado festivals, and self-promotional sites; FWD:labs works to tie all of these together for our members and capitalize on the ways to reach an expanding audience.

With iTunes, which films make the cut? One blogger noticed “Lifted” from Pixar was nominated, but not available (until summer). Their selection is unclear, unlike user-generated video uploaded to revenue-generating sites like Metacafe and Revver.

The iTunes deal adds to their content from Sundance, which went up last month with several festival-screened shorts. Less than half of the live-action and animation shorts are for sale; most are still streamed for free on the Sundance web site, but only for three months after the festival run. Back in November 2006, 16 shorts from graduates of the AFI Conservatory went on iTunes (search for “Shorts International”) for sale.

Filmmakers apparently get the bulk of the $1.99 sale. The remainder is split by Apple and, in the case of the Sundance shorts, between the Sundance Institute and the Sundance Channel. The artists are able to make deals with other distributors.

Why stop with shorts? John Cooper, the Sundance Institute’s director of programming, told the Associated Press that, “Sundance is really known for (it’s) platform for people to sell their films, and that’s mainly the feature film. We didn’t want to really interfere with that yet.” As for Apple, which tends to be a pioneer, the ability to buy and download-to-own feature films may be coming up fast. FWD:labs will be pioneering for the artists who want to push their work in this new medium.