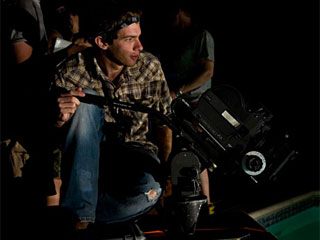 With his work recently screened at the Young Director’s Night at LACMA, complete with glowing reviews, Alex O’Flinn — member of the FWD:labs Collective — is a filmmaker with strong vision and ceaseless momentum.

What are you most proud of and what do you want to do next?

Alex O’Flinn I think I am most proud to be in a place where I am surrounded by great artists and collaborators who inspire me by their work and their contributions to my projects. Film is 100% a collaborative medium, and a work lives and dies by the ideas of those involved, so I just feel incredible fortunate to have friends and collaborators who take visual storytelling to the next level.

What’s one thing you learned recently about filmmaking?

AF The most important thing I’ve learned lately is that you have to stick to your guns about the types of movies or art you want to make. Not to sound cheesy, but you really have to walk to the edge of the cliff with your idea and take risks. That’s when the really great stuff happens. There’s nothing worse than making a good movie that says nothing. The most beautiful thing a film can do is make people think for days after watching it.

What real or imaginary technology in emerging media would you want to explore and why?

AF I think we’re in an interesting time with technology and only time will tell how everything pans out. Obviously, the internet and what it has done for independent cinema is truly groundbreaking and remarkable. And the same goes for the digital camera technology that is out there. But I think what is important to remember is that the technology is only a tool that helps us tell stories. Just because one can theoretically make “Lawrence of Arabia” on the 5D, doesn’t necessarily mean they should. The technology and the story are directly related, and if one knows that they will be limited to a certain camera during production, the attributes of that camera must be planned out accordingly in the visual style, color palette and locations of the film.

I sometimes like to compare the time we’re in to the 70’s when all of these synths were coming out in the music industry, and they flooded all of these albums because they were a new toy that everyone was in awe about. Fast forward 20 years and that production value couldn’t be more dated on many albums. It’s important to keep the “wow” factor in check when dealing with technology, and keep the focus on what’s really important — the story and what best serves the story.

AF I love having conversations. They don’t even need to be about film. If you and the people you work with were only brining their knowledge of film to the table for a project, so much would be lost. Finding out about each other’s interests, travels, favorite literature, hobbies, etc., proves invaluable when fabricating a world for a story, and also forms a bond between you and your collaborators. I also believe in having a lot of conversations/rehearsals about the project early on and then being more hands off as shooting approaches. I feel that once everyone is on the same page and gets the story, every collaborator does much better work when their isn’t someone constantly looming over their shoulder.

What are some of your regular influences for creative ideas?

AF I’m very influenced by literature and still photos. Sometimes I’ll get ideas from seeing a certain photograph at a museum. It can be the lighting, the composition, an expression in one of the characters faces, anything that gets me thinking about tone and backstory. With stories, it can be a sentence or sometimes a whole piece that speaks to me. In the best instances, I’m able to see images as I’m reading. As for artists who constantly influence me — Sam Shepard, Ryan Harty, Richard Avedon, William Eggleston, Philip Lorca di Cortia, Homer and Virgil, to name a few.