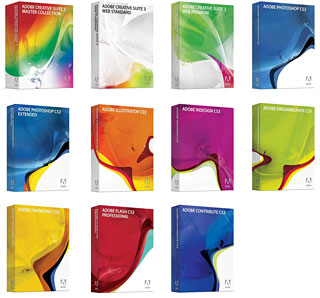 A la carte upgrades are also available for the Adobe and Macromedia products. Most English versions available by the end of April 2007.

As a designer, Pablo Matilla noted the similarity to CS2 with one major exception: Flash. Adobe Flash. “It’s the most amazing thing. Import from Illustrator, Photoshop, straight to Flash. And now Premiere can export to Flash video. It’s pretty much everywhere now, so it’s a huge hook to have Premier. People might use Premier to release videos themselves with Flash.”

During Adobe’s launch event presentation, a mobile marketing and design firm, Punchkick Interactive, took some very clear notes, which point out the major feature improvements with programs like Photoshop and their integration improvements.

Leading up to this announcement, Adobe released a video, “What is in the box?,” on YouTube on March 1st to promote the launch. It’s been seen over 100,000 times.

Apple, a competitor for the video market, has a lot of collaboration in this campaign, including a new micro-site. The Apple Store had CS3 demos today, continuing tomorrow, and the online store has pre-ordering.