[Tenacity] “Ever Since the World Ended” 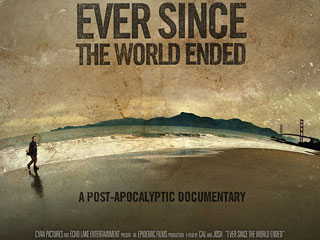 Sir Winston Churchill once wrote that “a pessimist sees the difficulty in every opportunity; an optimist sees the opportunity in every difficulty.” Filmmakers Joshua Atesh Litle and Calum Grant didn’t give up for the last six years it took to get distribution. Their post-apocalyptic documentary screens in New York City next week, January 10th thru 17th.

Ever Since the World Ended (Official Site, IMDb Listing), which was Litle’s first full-length feature, was offered broadcast acquisition for cable as well as receiving theatrical and DVD distribution. The film — completed in 2001 — follows two filmmakers wandering an empty San Francisco with a camera, twelve years after a plague has emptied the world of people, making a documentary portrait of a small community that perseveres.

“Because it is a small, modest art-house film, it will be a limited engagement of one-week only (!) at the Pioneer theater (9pm at 155 East 3rd St.) in the East Vilage.” Litle used his own e-mail list to keep those interested informed over the years. Consider buying advance tickets.

Update: The New York Times reviewed the film, available on their site, during the week-long run. The film’s distributor, Cyan Pictures, also has a micro-site for the project.