Filmmaker Michael Rousselet is one of a dozen behind 5 Second Films, an online destination that’s been making a new film every weekday for nearly three years, resulting in over 650 short shorts and millions of views. “Osama bin Laden’s Final Video,” which aired hours after the actual announcement on May 5, is already their fourth most popular of all time. 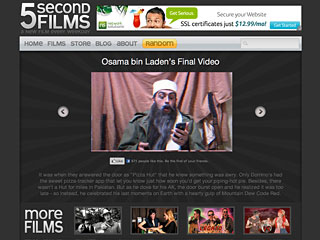 Film, as seen on the official site

How was this 5-second film on “Osama bin Laden” conceived after the news hit? How did you all make it and how did it go viral?

Michael Rousselet We always shoot five films every Sunday to get us through the week. On that particular Sunday the group went all the way out to Malibu Canyon early in the morning to shoot the special â€œCinco de Mayoâ€ 5sf. By the end of the day everyone was exhausted and we still needed one more film to shoot in order to meet our quota. We mulled over a couple ideas, none of them we were too enthusiastic about. So we decided to just take a breather and see if a better joke would naturally come to us, which can be a dangerous thing to do with 5secondfilms. It was then that we heard the rumors that Osama bin Laden had been killed and that the President was going to make an announcement. We knew instantly what the topic of our 5th film would be.

At first, there was a discussion of doing a news joke and how a terrible anchor would make the announcement, but we became dissatisfied that the concept of the joke was too standard and uninspiring. Then I just proposed the title â€œOsama Bin Ladenâ€™s Final Videoâ€ and everyone latched onto the concept. It had a lot of potential for a fun and successful 5sf 1.) It would be visually interesting 2.) Someone would get to dress up like Bin Laden for mocking and 3.) the title alone had a high chance of going viral if we posted it quick enough. We immediately became enthusiastic and went into overdrive to get that 5secondfilm shot. 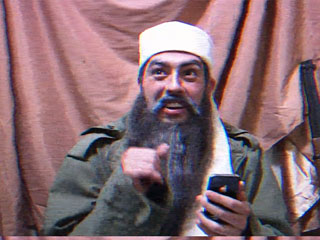 We got our good comedic friend Alec Owen to play Osama, which was funny because we originally invited him over for a completely different joke. When he walked through the door I said, â€œYou are playing Osama Bin Ladenâ€ and handed him a glass of whiskey to take the edge off.

We knew we wanted the 5sf to be a single take like a home video so we just set up the camera and started riffing on lines. We must have done 30 minutes of different set ups and jokes, but they all had the same initial punch line of an off camera sound interrupting Osama Bin Laden inferring that the SEALS had arrived. Alec Owen is the one who should get the ultimate credit for the pizza tracker iPhone joke.

When we finished shooting I immediately started editing it. We knew the 5sf had to go up immediately that night. By 12:20am PST 4 hours after President Obamaâ€™s announcement we posted the joke on our 5secondfilms.com homepage and our 5sf YouTube channel. (We never post the same 5sf on the same day with YouTube, we always delay it by a day to try and encourage fans to come to our home site first for the latest 5sf, but this one was special.) We knew we had a good video with a hot search topic and we wanted to be the first to hit the webs running with a good Osamaâ€™s dead joke.

It was an immediate success. All the first comments were â€œWow! That was fast!â€ Someone even commented on our Facebook fanpage â€œThis is how I found out this morning.â€ That was pretty thrilling to think that we actually gave someone the news. I can only imagine how confused they must have been when they saw that video.

As of today, â€œOsama bin Ladenâ€™s Final Videoâ€ is our 4th highest viewed video — soon to be 3rd and is still rising. It has a long way to go until it beats Adrianâ€™s â€œLate for Workâ€ 5sf which has over 3 million views. 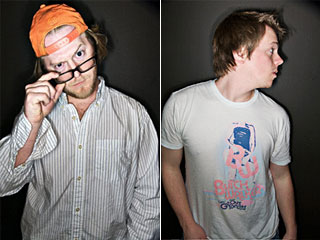 Tell me about your background in screenwriting and what you’re doing outside the 5sf “house?”

MR I met Brian Firenzi, the creator of 5sf, at USC in the screenwriting program. In fact, most of the 5sf crew are screenwriting majors from USC. We never would have imagined that after we graduated studying feature films we would be pouring most of our sweat and creative powers into short short short films.

What specifically have you learned by doing 5sf that you didn’t know before working in such few frames and shots?

MR 5sf does keep us very sharp when it comes to filming, editing, and storytelling. When you get use to compacting information into 5 seconds to tell a story it really helps when we write longer form stories. We have developed a better story telling instinct on how to get the essence of the scene across faster and clearer. On the downside 5sf has also ruined our attention span for any web video over 3 minutes long. 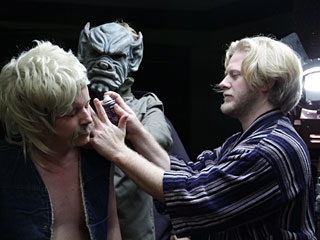 Behind the scenes of another 5sf

How do you all in 5sf work together? What have been some of your favorite collaborations? What are your favorite films, of yours or others in 5sf?

MR There are basically 12 of us regular 5sf hoodlums. 5 of us live together in one house, which is affectionately referred to as â€œthe 5sf house.â€ Itâ€™s where we have all the costumes, props, equipment, and green screen. The house is really a zoo for movie making.

We usually try to have meetings a few days before we shoot where we can kick around ideas and plan, but that gets harder and harder to do because everyone is busy working on other projects. Lately, when someone comes up with a joke we throw it up on a joint Google Doc that we can all see and edit. Sometimes when we all meet on Sunday to shoot the first half of the day is sitting around wondering what we are going to shoot hahaâ€¦ that is never fun. The best 5sfâ€™s are the ones we plan and refine together in advance. 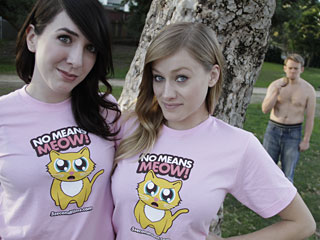 What do you think is the success of 5sf and specifically this “Osama” parody? Where do you think online video is headed?

MR A good 5sf is universal. Jokes always work better when they are visually based in humor, itâ€™s more accessible and easier for the audience to digest then trying to comprehend what a character is quickly saying. Everyone gets it no matter what their language. â€œLate for Workâ€ is so successful because everyone can relate to how it feels being late for work. It screws up your whole day and thatâ€™s exactly what the video expresses and it expresses it clearly.

I think the viral success with â€œOsama bin Ladenâ€™s Final Videoâ€ comes from how quickly the whole team worked together on a joke that was such a hot topic. We made it the very night the news hit. If it came out a few days later it might not have been so successful. We have no idea where the video will go from here but we hope it goes far.