Why Aren’t There More Female Cinematographers? 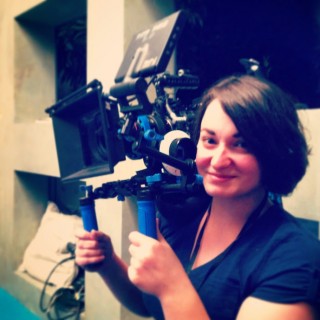 A lot of people have asked my opinion on the lack of female cinematographers in the industry. It’s something I’ve mulled over for a while. And while I think the film industry has it’s own unique problems regarding sexism in both the content it produces and its treatment of its own working members, it stems from something deeper set in our society.

Freja Dam, a student from the Columbia Journalism School, recently wrote me to ask me questions on this subject for an article she is researching. She found me because my blog pops up immediately when you google “female cinematographers.” (Hooray for me! That is the purpose of my blog! To continually ask the question WHY IS MY DINKY BLOG THE FIRST THING THAT POPS UP?! I will continue to point out how silly this is until Ellen Kuras is the top google result.)

Anyways, she asked me some pretty great questions. I wrote out my response and asked a few friends to weigh in. It was a pretty solid consensus. So I wanted to post my thoughts as well. Here was my email in full, with Freja’s questions in bold.

(And before I get any gripes, here are my previously published thoughts on the totally unnecessary term that is “female cinematographer.”)

Do you think it’s women who for whatever reason choose not to pursue cinematography, or are they driven away because they don’t get hired?

I think cinematography is presented as intimidating, and there is a severe lack of encouragement to pursue it.

Just getting in to the field of cinematography is incredibly daunting on its own, and there isn’t a lot of encouragement directed specifically toward women to join. If you look at the American Society of Cinematographers, as of last year I believe there was only around 8 women out of over 300 members. Not sure if that has changed much since. I know a lot of women find my blog because they can’t find any other resource online that addresses the issue (which is mind boggling to me. I started writing about this on a whim!) Most of the articles I find that interview a female DP don’t ask them about their work, but things like “how do you keep your femininity in tact on set?” They describe the clothes they are wearing, or their hair. Just once I’d like to see an interview when they ask a woman DP what lenses she used. We need to stop telling these women their femaleness trumps their actual work.

From all sides women are often told that cinematography is a dude thing. It’s too technical, the equipment is too heavy, you wouldn’t like the brutal hours, it’s a guys club, you won’t have time for a family or romantic relationships. One of my readers wrote to me and described how she was told by the man giving the entrance exam to the film school she wanted to attend that she wouldn’t make it in because “women get too emotional during that time of the month” and couldn’t handle themselves on set.

And it doesn’t help that working female DP’s aren’t very well known or celebrated. Who is telling these women that “she did it, so you can do it too?” Ellen Kuras, Nancy Schreiber, Anette Haellmigk, Mandy Walker– they all do very high-profile work with celebrated directors, but no one knows who they are.

Once women do make the choice to pursue camera work, they often find themselves in a hostile environment. I remember a friend of mine, when I told him I wanted to DP, looked worried. He said, “All the women I know who got into that field ended up really hardened and callous. It’s brutal.”

I definitely think more female DP’s need to be hired, and more women need to be in camera in general. Set a new precedent. A lot of female cinematographers are out there, working and slogging through the bullcrap. It’s the only way to show both men and women it can be done differently. The whole climate has to change.

Is the film business just sexist, or is there some specific characteristic about cinematography (I heard an argument that the cameras are heavy, and it’s very technical) that either drives women away or keeps (male) producers/directors from hiring them?

Camera department for women definitely is distinct when compared to the climate in other departments. The boys club mentality is still reigning strong, using the physical, technical, and leadership aspects of the job as reasons to keep it that way.

When it comes down to it, men feel a lot more comfortable with hiring other men in regards to camera. I can’t remember of the top of my head, but someone in an interview once said something to the effect that “Men [in the industry] are considered competent until proven otherwise; women are seen as incompetent until proven otherwise.” Edit: it was DP Claudia Raschke who said, “When you go to an interview or onto a set, as a woman you are incompetent until you prove you know your stuff. As a man, you are considered competent until you are proven totally incompetent. We’re not given the same chance because we don’t have a track record yet.” We are not given the benefit of the doubt like men are, and somehow we are considered more of a risk– and it’s our technical and leadership skills that are questioned.

Will an all-male G&E department listen to a female DP? Can she command respect? Does she know her stuff? Does she know the technology? If she’s my boss, will she be a bitch? Do I have to be on good “behavior”? Can she handle the high pressure and long hours without getting emotional?

Another reader of mine wrote me in frustration about how she was told by a producer she was very much qualified for a job, but they had to pass on hiring her because having a girl there would basically “ruin the fun” and they’d have to pay to get another hotel room for her. In an ironic reversal of that, I was actually brought on to a job once because “having a girl around might make them behave better.”

A common thing I am asked by women who read my blog is how to be less intimidated by the technical stuff. Being surrounded by dudes talking shop all the time can be overwhelming and even numbing. I don’t get particularly excited by tech specs myself. It’s what I can do with them that gets my brain working. I think having other women around to talk camera would help aspiring DP’s immensely– it would make them feel less isolated and more confident. It would widen the conversation.

A friend of mine added that it doesn’t help that women aren’t encouraged to pursue technical careers in general, starting even at a young age.

As to the heavy equipment thing… I am not sure how often Roger Deakins or Janusz Kaminski actually carry their own equipment around aside from operating. My male and female friends work out to keep themselves in shape for operating. It’s not that hard.

Why do you think it’s harder for women to break through as a cinematographer as opposed to a director/producer/editor?

Basically what I mentioned above: it’s a harder boy’s club to break into. It’s more intimidating technologically, and harder to prove yourself. Female DP’s are less celebrated and less praised for their work. Directors I think experience a lot of the same things– namely being questioned about their ability to lead. Somehow the industry will trust a woman to produce an entire film and handle millions of dollars, but they get weirded out by putting a camera in her hands.

The reason I got into cinematography was because it intimidated me. I saw those film cameras at school and decided I wasn’t going to be afraid of accidentally breaking them. I wanted to know how they worked. And I totally fell in love with them. It’s still scary at times. But cinematography and camera really fuel how my brain works. It’s how I tell stories.

I was really lucky when I was in school and even now, working with supportive professors (including ASC member Judy Irola) and friends and colleagues that don’t think twice about handing me a camera. I get to work on projects I really care about. Of course, getting out into the field gave me enough “adventures in sexism” to start really thinking hard about women’s place behind the camera. That’s why my blog started leaning in that direction. I want to help other women avoid the fear that I had. The industry is ready for change.

I learned cinematography through lighting for actual film, and still often prefer it sometimes- but digital is giving us so many new ways to tell stories, and it’s an incredibly exciting time to be in camera. I don’t want women to miss out on that.

Why is it important to have female cinematographers, and what do you think is the goal – 50/50?

Right now one of the big debates going around Hollywood is whether or not female stories can bring in audiences. It has been proven time and time again that they do, but somehow Hollywood keeps asking, “Really? Can they really bring people in?”  At the same time, we have male writers, directors, and creatives making the female-driven movies (and all the male-driven movies) that we actually do have. This seems ridiculous to me.

Why are female cinematographers important? The same reason female writers and directors and editors are: cinematographers are storytellers. Through all that technology and equipment, they are telling a story. They bring their own style, story and perspective to their work. They know the characters as deeply as the director, the meaning behind each scene and what it means for the light and the frame. To shut women out of that field would be a profound loss for the film community and movie goers.

Having more female cinematographers will also bring more women behind the camera. Encourage more women to see a career in cinematography as something attainable, interesting and worthwhile. It will help change the weird stigmas that still exist on set. It will make more inclusive, diverse communities and thus better storytellers.

50/50 would be incredible. Right now though, numbers aside, I think the real challenge we face is being seen as “cinematographers” and not “female cinematographers.” I advertise my blog that way in order to draw attention to the disparity. But the goal is to make women as cinematographers the norm, not the exception. That’s when the numbers will fix themselves.

(Originally published at I Should Write This Down.)

— Lauren Haroutunian
Cinematographer
I Should Write This Down
@laurasaurusrex

This article by @laurasaurusrex is one that I think my best lady DP @okkeyes would love!
http://t.co/HTM6LamlSk #womeninfilm #cinematography

Really inspiring write-up Lauren, thanks a ton.. Boosts my confidence!

This is a great article! It provides a lot of encouragement too. I just got hired on a feature the other day and a bunch of males contacted the director’s personal e-mail and stated, “How dare you hire a women DP. The integrity of your film is now ruined.” This guy has never even seen me, seen my work, or spoke to me before. Incredible.

It seems like more encouragement needed for women to show their skills in cinematography.