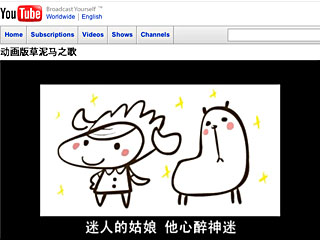 A viral video in China has been raising eyebrows and causing much discussion. The video is about a mythical creature called a “grass-mud horse,” a name which, when written is quite benign, but spoken takes on a different meaning — and sounds like a terrible curse. The video has evaded the Chinese censors which frequently block internet keywords that could be seen as a threat to the government; thus the video has reached notoriety for its mocking of the repressive regime.

In the video the grass-mud horses are facing a problem, invading “river crabs” are devouring their grassland. “In spoken Chinese, “river crab” sounds very much like “harmony,” which in China’s cyberspace has become a synonym for censorship. Censored bloggers often say their posts have been “harmonized” — a term directly derived from President Hu Jintao’s regular exhortations for Chinese citizens to create a harmonious society.” The viral video and the phenomena it is causing in cyberspace was written about in The New York Times.

From Michael Wines’ article in The New York Times:

“The grass-mud horse is an example of something that, in China’s authoritarian system, passes as subversive behavior. Conceived as an impish protest against censorship, the foul-named little horse has not merely made government censors look ridiculous, although it has surely done that.

It has also raised real questions about China’s ability to stanch the flow of information over the Internet — a project on which the Chinese government already has expended untold riches, and written countless software algorithms to weed deviant thought from the world’s largest cyber-community.

Government computers scan Chinese cyberspace constantly, hunting for words and phrases that censors have dubbed inflammatory or seditious. When they find one, the offending blog or chat can be blocked within minutes.

Xiao Qiang, an adjunct professor of journalism at the University of California, Berkeley, who oversees a project that monitors Chinese Web sites, said in an e-mail message that the grass-mud horse “has become an icon of resistance to censorship.”

“The expression and cartoon videos may seem like a juvenile response to an unreasonable rule,” he wrote. “But the fact that the vast online population has joined the chorus, from serious scholars to usually politically apathetic urban white-collar workers, shows how strongly this expression resonates.”

China’s online population has always endured censorship, but the oversight increased markedly in December, after a pro-democracy movement led by highly regarded intellectuals, Charter 08, released an online petition calling for an end to the Communist Party’s monopoly on power.

Shortly afterward, government censors began a campaign, ostensibly against Internet pornography and other forms of deviance. By mid-February, the government effort had shut down more than 1,900 Web sites and 250 blogs — not only overtly pornographic sites, but also online discussion forums, instant-message groups and even cellphone text messages in which political and other sensitive issues were broached.

Among the most prominent Web sites that were closed down was bullog.com, a widely read forum whose liberal-minded bloggers had written in detail about Charter 08. China Digital Times, Mr. Xiao’s monitoring project at the University of California, called it “the most vicious crackdown in years.”

It was against this background that the grass-mud horse and several mythical companions appeared in early January on the Chinese Internet portal Baidu. The creatures’ names, as written in Chinese, were innocent enough. But much as “bear” and “bare” have different meanings in English, their spoken names were double entendres with inarguably dirty second meanings.

So while “grass-mud horse” sounds like a nasty curse in Chinese, its written Chinese characters are completely different, and its meaning —taken literally — is benign. Thus the beast not only has dodged censors’ computers, but has also eluded the government’s own ban on so-called offensive behavior.”

Read the full article. Thank you to Andy Doro for pointing the story out.