The Two Revelations in “The Five Obstructions” 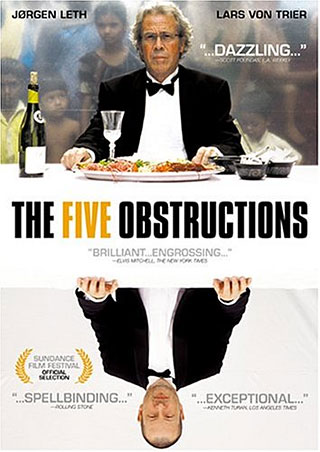 In Lars von Trierâ€™s excellent documentary The Five Obstructions (2003), von Trier challenges his mentor and veteran filmmaker Jorgen Leth to remake Leth’s own highly-regarded short film, “The Perfect Human” (1967), five different times. Acting as a creative trickster, von Trier requires that Leth be subject to a different set of substantial limitations on each of the five remakes. Two themes relevant to the lives of creative professionals are explored within this setup: creativity through limitation and the mentor/mentee relationship.

How many times does a filmmaker wish he or she had unlimited funds and complete creative freedom? In The Five Obstructions, the student attempts to trip up the teacher by doing the opposite: limiting the creatorâ€™s freedom. Without judging him negatively, Von Trier deems Leth to be detached and overly affected as an artist. Von Trier jokes with Leth, but his obstructions are meant to go to Lethâ€™s heartâ€”to rattle him. Leth plays along, but, at first, he is somewhat lethargic. One guesses before von Trier mentions it that Leth is going through a creative stagnation. The first challenge appears daunting to an older filmmaker like Leth (particularly the maximum of 12-frames-per-shot rule), but it is really a softball to get Leth warmed up. Next, von Trier directs Leth to shoot a remake in close proximity to real human suffering, and then, perhaps more challenging, in the next remake, given no limitations at all. As the challenges go on, one can see Leth start to enjoy the process. In fact, the fiercer von Trierâ€™s obstructions, the more Leth is engaged.

What is demonstrated is that conscious (in the sense that the limitations are from Lethâ€™s friend and devotee) limitation firmly imposed can inspire. This begs the question: How can creative fire be found in limitation that seems arbitrary, such as a clientâ€™s unrealistic demand or unforeseen inclement weather? This may be overly metaphysical for this blogspace, but perhaps investigation into what one considers to be the nature of conscious action could be a direction for exploration.

Professionals in the entertainment industry often benefit greatly from formal and informal mentor/mentee relationships. In these liaisons, there is the sense that the master must be firmly in control at all times. Annakin Skywalker is chastised for challenging his masters, and it is a short, slippery Mustafarian slope from there to the dark side. Von Trier turns this dynamic on its head in The Five Obstructions. Here master willingly and (mostly) eagerly allows the apprentice to challenge him. Sensing Lethâ€™s funk, von Trier leads and prods Leth in the first two remakes. Leth regains his feet in the third remake (where he is given absolute freedom) and then knocks it out of the park in the fourth remake. By the fifth remake, von Trier is ready to admit that his obstructions and efforts were actually thwarted (obstructed) by the mastery of Leth. Von Trier relinquishes the mantle he temporarily possessed and declares that Leth has earned its return.

What von Trier and Leth explore is the dance of the mentor/mentee relationship. The push and pull; the yin and yang. The master usually will lead simply through his or her superior skill, and great deference must be given to the master during the moments when his or her control cannot be maintained. However, the apprentice must also be willing to take initiative, to push back (for example, the classic movie beat in which the black belt asks the adept to throw a punch and the adept, no matter how tough, usually ends up on his back), to challenge the master, to know the master, and to give energy to the master when he or she has slipped. At the same time, the master must be willing to accept the challenge and not seek, so to speak, to eat the young in response to their natural impudence.

For the limitations of each obstruction see Wikipedia. For a short movie review, visit AllMovie.

Note the next FWD:labs Salon is next Saturday, July 24th. It will include an exploration of what near-unlimited funds and near-complete creative freedom looks like.