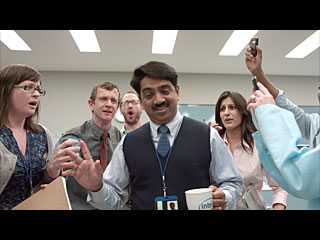 Rebecca Tushnetâ€™s 43(b)log alerted me to an interesting copyright/trademark issue. Apparently actorsâ€™ unions are requesting that advertising agencies either pay them for unauthorized YouTube uploads or send DMCA take down requests. The Joint Policy Committee on Broadcast Talent Relations has released a position that there are no fees associated with unauthorized uploads and advertising agencies are under no legal obligation to send take down notices.

(This video appears to be authorized but is still awesome despite not being particularly relevant.)

Rebeccaâ€™s post notes that the law on whether actorâ€™s individual rights are preempted by federal copyright law is currently split. While I agree with Rebecca that this is a great topic for someone to right a law review note on, I donâ€™t currently have the time.

Instead, I would argue that this should be covered by contract. First, in this day and age (wow writing that makes me feel old) everyone should expect anything they do on video to be widely available on YouTube or elsewhere online. Second, given that advertising agencies (and their clients) generally want their commercials to be viewed by as many people as possible, they have no incentive to issue take down notices for unauthorized uploads. Since this should have been a foreseeable issue by the sides during contract negotiations, I would argue that the language of the contract should control. If the contracts call for payment of fees for authorized YouTube uploads then it seems to me the advertising agencies are impliedly authorizing the uploads by their failure to police the copyright.

Given that actors have typically waived all copyright claims to the works in question, the unions should pursue a breach of contract claim for the fees (which is presumably what they would prefer over take down notices anyways).

(Originally published on Run with the Law.)