Print is Dying, and Esquire is Killing It 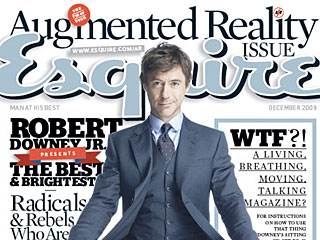 Last year, I was pretty put off by Esquireâ€™s 75th anniversary, â€œe-inkâ€ cover that they slapped on their October 2008 issue. It was obviously just an attempt at pretending that print media isnâ€™t dying, but simply, adapting. A very impractical attempt at that; The battery that powered the e-ink implement burnt out quicker than they had expected, and they must have been pretty expensive to produce, because exactly NOBODY actually owns a copy of the e-ink version of the cover. It wasnâ€™t sent out to subscribers. I didnâ€™t even see it on any newsstands when it was supposed to be on display. All I saw was a demo video of it on Esquireâ€™s website.

This month, Esquire announced their upcoming â€œaugmented realityâ€ issue. On some of the pages, you will find garish, barcode-looking elements that, when shown to a webcam-enabled application (yeah, you have to actual download and install stand-alone software) available on the Esquire website, will display on your computer screen a kind of â€œlivingâ€ overlay of that page, with full-motion video. If that sounds gimmicky, itâ€™s because it is. If it sounds glitchy, itâ€™s because it very much is. Check out the demo at http://www.esquire.com/ar. Even the official demonstration video shows some serious latency that will frustrate you before you even get to try it out yourself.

I actually still have faith in Esquireâ€™s original content. I am a subscriber. But what does it say to the casual reader when youâ€™ve been reduced to taking whichever emerging technology that is currently the most buzzworthy, then completely and totally misusing it in order to sell magazines? What more idiotic ideas do Esquire readers have to suffer through? The â€œ240hz Issueâ€ maybe? Or, the â€œCloud Computing Issue,â€ wherein a subscriber might be required to enter a new URL in their browser to read each print page? Those jokes are about as useless and cheeky as this â€œaugmented realityâ€ issue, and I am continually putting that name in quotes because I fail to see where exactly â€œrealityâ€ makes itâ€™s debut? This is not â€œaugmented reality,â€ this is Augmented Me-sitting-at-my-desk-showing-my-webcam-a-piece-of-paper-like-a-moron.

Gimmicks like this are the print-equivelent to television sitcom â€œstunt-castingâ€. Esquireâ€™s antics can be reduced down to simply one word: novel. And I use the word â€œnovelâ€ here as a negative. â€œNovel,â€ like, completely superfluous and worthy of no preservation. â€œNovel,â€ as in the total opposite of â€œimportant.â€

(Originally published on The Post-Modern Yuppie.)

Just found the "first AR music video," which features John Mayer's "Heartbreak Warfare" and was released a month ago.

"Flash Augmented Reality (FLAR) is a way of creating a digital hologram in 3D space by holding up a marker to your computer's camera and activating a special piece of Flash software. As you can see in this video, I'm holding up a piece of paper with the designated marker (in this case a broken heart), and the video of John Mayer follows it around the screen, and even tilts in 3D space!

"The FLAR technology was featured in WIRED Magazine, and you can check out their video as well.

"You can try out John Mayer's Augmented Reality video for yourself at http://www.johnmayer.com.