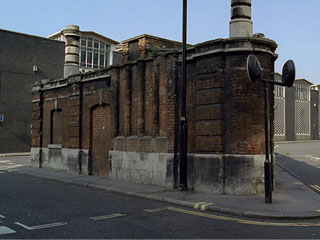 Lewis' 2007 project, Isosceles, can be viewed online. The 3 minute piece was shot on Super 35mm and transferred to high definition.

In June I had the pleasure of working with Mark Lewis, a self-described “moving picture artist.” Mark was in from London to finish the second half of his documentary about rear-projection and it’s longtime custodians, the Hansard family. Mark and his DP, Brian Pearson, had already shot half the documentary the year before as background plates upon which they photographed the second half of the doc.

In a warehouse in Sun Valley, technology old and new merged in an interesting way: the Red camera was used to shoot new footage of various Hansard kin in front of their rear-projection screen. At one end of the warehouse, the Red camera, firmware updated only the week before. At the other end, the carbon arc flame rear-projector, 9 feet tall as if it was an inch, iron clad and, visually, straight out of 50’s sci-fi. The operators of these two machines were separated by 300 yards and 40 years.

Adjacent to the Red, the so-called “data wrangler” station: 4 TB of blue-LED’d storage (why always with the blue LED’s on these drives?), gleaming Macbook Pro, young 20-something “wrangler.” Nearby, the analog analog: buttressed by stacks of film canisters, a Moviola, used by Mark to identify which bits to project behind which Hansards. It was truly a sight to see.

I recorded sound on this project and talked to Mark briefly about my role before we began shooting. He had little to advise me on as, of the dozens of films he has made over the years, only a small handful have sound. They are truly “moving-pictures” in the most literal sense of that phrase. However attached I am to the notion that motion pictures are approximately one-half sound, one-half picture (and I think that holds true for most narrative work) I must admit that nothing is lost from audio being absent in Mark’s films. Sound might even distract from the experience.

Mark told me that, for the most part, his works are installed as exhibits in art galleries, sometimes projected enormously. Computer LCD screens presently maxing out at 40 some-odd inches, we’ll have to settle. Have a look at marklewisstudio.com.