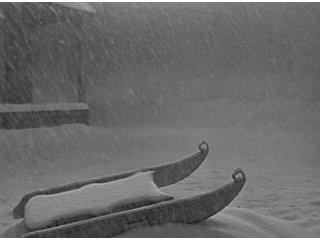 Ask any veteran filmmaker and they’ll most likely agree: there is no end to the learning process. It’s easy to forget this. We’re so afraid to make mistakes that we don’t make anything at all. I speak from experience. For three years while I was toiling away at an insufferable 9 to 5 job, I made no films. Any ambition, inspiration and motivation I once had seemed non-existent. I might as well have been a robot.

It’s a banal truism, but technology has changed everything. In the past three months I’ve shot over 10 short films with my Canon Rebel T2i. I mention this partly to brag but mostly to prove a point: nothing can stop you from creating except yourself. I don’t wait anymore. When I have an idea, I start writing it and I immediately begin pulling resources to make it happen: meeting with friends, actors, musicians, posting Facebook status messages asking for any help I can get.

It’s not easy. It never is. That’s where part of the joy lies — the constant, unexpected challenges. Does this mean that I settle for less than what I expect? No. I still spend a good amount of time rewriting scripts, re-thinking shot lists, and worrying about whether or not it’ll all actually work. But I don’t expect to make masterpieces. In fact, as unrealistically high as my standards are, I often expect the worst. Somehow, my little short films end up being decent or maybe even pretty good. So far, at least. My goal is to entertain an audience but my number one priority at this point is to learn, and hopefully improve, with each experience.

Don’t try to make the perfect film. You don’t have to blow anyone away with the next Citizen Kane. You know what your â€œrosebud” is; take a ride and see what happens. As James Cameron once said, â€œPick up a camera. Shoot something. No matter how small, no matter how cheesy, no matter whether your friends and your sister star in it. Put your name on it as director. Now you’re a director. Everything after that you’re just negotiating your budget and your fee.” Grab a camera, a few friends and just shoot something. The irony is, there’s perfection in that itself.

(Originally published at The Right Time is Now.)