Crash Course in the State of Public Education 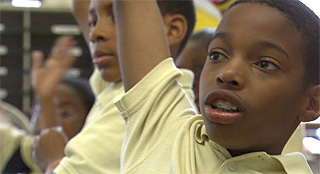 “Waiting for Superman” is an emotional crash course in the state of public education in the U.S. Using powerful narratives and a sprinkling of statistics and animations, director Davis Guggenheim left me with tears welling up in my eyes. Instead of painting a black and white picture and pointing a finger at an evil villain, the film acknowledges the complexities of the problem with our educational system and highlights a few inspirational programs that are working.

Guggenheim tips his hat to Errol Morris by using black and white archival footage of old Superman episodes in trying to add another layer of depth to the film. He does a poor job incorporating the Superman analogy throughout the film and felt it was a Guggenheim’s attempt at trying to be profound.

The film is backed by a strong social action campaign and every theater goer who watches it is rewarded with a $15 gift certificate to apply to an educational charity. Incredible, seeing as my ticket was only $13.

Bottom line, this was an excellent politically charged bipartisan film that I feel will be a turning point in public education. It took Sundance by storm and I’m sure it will land the Oscar for best documentary.