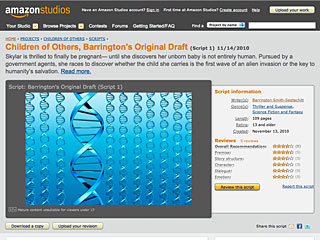 The Amazon Studios experience continues. As of last night there 395 projects, and today before 5pm–less than 48 hours after launch–there were over 500. It gives you an idea of how many people see themselves as potential filmmakers and either don’t read or understand the terms of the contract, or are desperate enough for a chance that there are willing to give away an 18 month option to their work.

Yesterday a new project appeared, and within five hours accrued over 2000 “downloads” thrusting it into the limelight of the first page and various sidebars populated with the “most popular” projects. I surmise this is someone with a huge number of friends… or a bot. (There seems to be no limit to the amount of times you can download from the same IP address.) My sense is that at this point, several entrants have experienced similar seeming contests and are using the usual strategy of recruiting as many “reviews,” as possible, as well as encouraging positive comments.

Yesterday night also marked first trickle of reviews. Like Amazon product reviews, reader reviews at Amazon Studio have a star rating system. A reviewer chooses between one and five stars in five categories (premise, structure, characters, dialogue, emotion) and an average of these is displayed as a “recommendation.” As of 5pm, most reviews are positive, and, while some are certainly random, I have noticed (since I know a few other players) that five-star reviews often emerge from a writer’s hometown, from people who share a surname with the writer, etc. Please don’t think I note this as a criticism of these writers–believe me, I’m not going to turn down positive reviews from anyone. (Seriously, leave me one now, I’ll take it.) But I think it is worthy of noting as part understanding if and how the site is working thus far as a method of vetting creative projects. My current feeling is that, moving into only the second full day, politicking is still a primary means of moving the players around on the board.

So the question is, at some point will a critical mass of non-partisan commentators emerge that will act as an equalizer, and at that point, will the site perform its function?

I don’t have the answer to this, but I do have one data point–in the form of another exciting development from last night. I received my first review! And it was not from my hometown or from a family member. It was from a total stranger in Quebec (Martin). Nor did he give me a five star review–far from it.

My reviewer’s spelling and punctuation leave something to be desired, and I don’t agree with much he said, BUT, I don’t see him championing any other script, and he hasn’t written a script himself, so my main point here is that I believe he actually wrote this, out of the goodness of his heart, with no agenda.

So… is this the guy the site needs more of? He is a passionate reader and willing to give his opinions, and that seems like one criteria. But is he an example of someone working at the level needed to vet creative product? How do we know whether to trust his opinion or not?

Within the Amazon community proper, a reviewer gets a good reputation (as I understand it) by reviewing products. Other people, who have either tried the product themselves or decide whether to try the product based upon the reviews, and rate a review in terms of helpfulness. Amazon Studio has set up something similar here, except that, as far as I can tell, the only person to rate a reader’s review is the writer himself. That could be problematic, as writers are known to be incredibly subjective about their own work.

“Hey, this Fred guy doesn’t like my writing (which is GREAT, by the way) so I don’t like Fred! I’m going to give him a low rating.” Or, “Yeah–my mom’s friend is absolutely right. This is better than Star Wars! Five stars!”

How to solve for this? My first thought is that other readers should ALSO be able to rate a person’s review. Maybe that person should be required to also write a review of the project in question to show they have read it and can judge–or maybe not. In actual development I’m sure execs feel they can determine good and helpful coverage without having read the script themselves–that’s why they want coverage! Right now the reviews are ostensibly “notes” for the writer, but they are also functioning as “recommendations” for other people as to whether they should bother to read or not…

So for both writers and our crowd-source development team, what constitutes a “helpful” review? Should it summarize the story or themes? Should it try to outline the structure? Should it speculate on whether the reader friends would go see it in a movie theater? I’m not really sure, but I bet some folks would have opinions.

Some possible advantages of review reviews and parameters for reviews is that they might:

PS. I know I’m discussing a lot of mechanics–the “how” of it. This doesn’t mean I haven’t also been thinking about the “why” and “should” questions that I think need to be asked–it’s just that right now, the mechanics are in flux, and changing quickly and I’m interested in recording that. Then I will definitely have some thoughts about what constitutes art, etc. In the meantime, John August posted today, starting to cover some of those bases.

yeah, i’m kinda skeptical and very hesitant whether to submit something or not

Aaron, thanks for the comment. It seems to be a split opinion on this so far. From screenwriters like John August, who’s got at least two critiques of this (http://johnaugust.com/archives/2010/on-the-amazon-film-thing and http://johnaugust.com/archives/2010/amazon-studios-round-three), to screenwriters like Barrington Smith-Seetachitt (author of the post above), it’s for some people and not everyone. Maybe consider submitting something you wouldn’t normally and see how it plays?

This is pure and simple exploitation of writers but most of them are too into the concept of the “big sale” to take a step back and realize you’re signing away your material for 1.5 years for probable no gain. And you could be rewritten, right? And not by anyone with talent besides whomever else is on this site, right? That’s my understanding of it, anyway. Can we all band together and be writers, not game show contestants? It seems like everything on the Internet for screenwriters are some variation of a roulette game. Roll the ball, and put 1.5 years of work and your life in which you could potentially push that material and bet it on red: Amazon Studios.

Another BIG PROBLEM @ Amazon Studios –> Their popularity ranking system is totally bogus. Anyone can learn how to game the system and create a top rated script. Scripts like Villain, Electric Sunset, Eyes of Darkness and Undesirables are perfect examples of poorly written screenplays that appear to have been gamed using the Amazon Studios ranking system. This is a poorly flawed system for representing the top ten scripts.

Amazon Studios has been very aware of their troubled ranking system but choose to ignore it. As customers complained, Amazon Studios sent email replies basically encouraging participants to game the system.

Fair-minded armature screenwriters are pissed! Because of public outcry, it appears Amazon Studios has their ranking system on lock-down as they scurry to fix it. (Jan – 2011)

PLEASE READ THE CONTACT!!!!!!, I wish I did before uploading, it is not just for 1.5 years it is forever. Anybody could revision your script and Amazon could copywriter it and make a movie based on your script. There should be some type of counter contract. Amazon has the ball in there court not yours.

I was drawn in by the contest, the total you could ever make with Amazon Studio is $600,000, you can’t direct your own movie, the process it totally out of your hands as soon as you upload to Amazon Studios website. Is this legal? to upload your script and not be able to remove it, meaning it is yours, you have no control over your work once it upload.

I am starting a lawsuit, because this do violate state and federal laws in some states and my is one of them.